The alarm clock went off at 6:38 as planned but I couldn’t move – I lay there terrified, not knowing if I was up for beginning this crazy adventure- walking 500 miles from southern France across northern Spain ending in Santiago de Compostella.

Officially this walk, this pilgrimage is called the Camino de Santiago and the route I’m taking is called the Camino Frances. It begins in the most charming walled town of Saint Jean Pied de Port and that’s where I was this morning, in bed trying too figure out if I can actually do this Spanish Schlep. 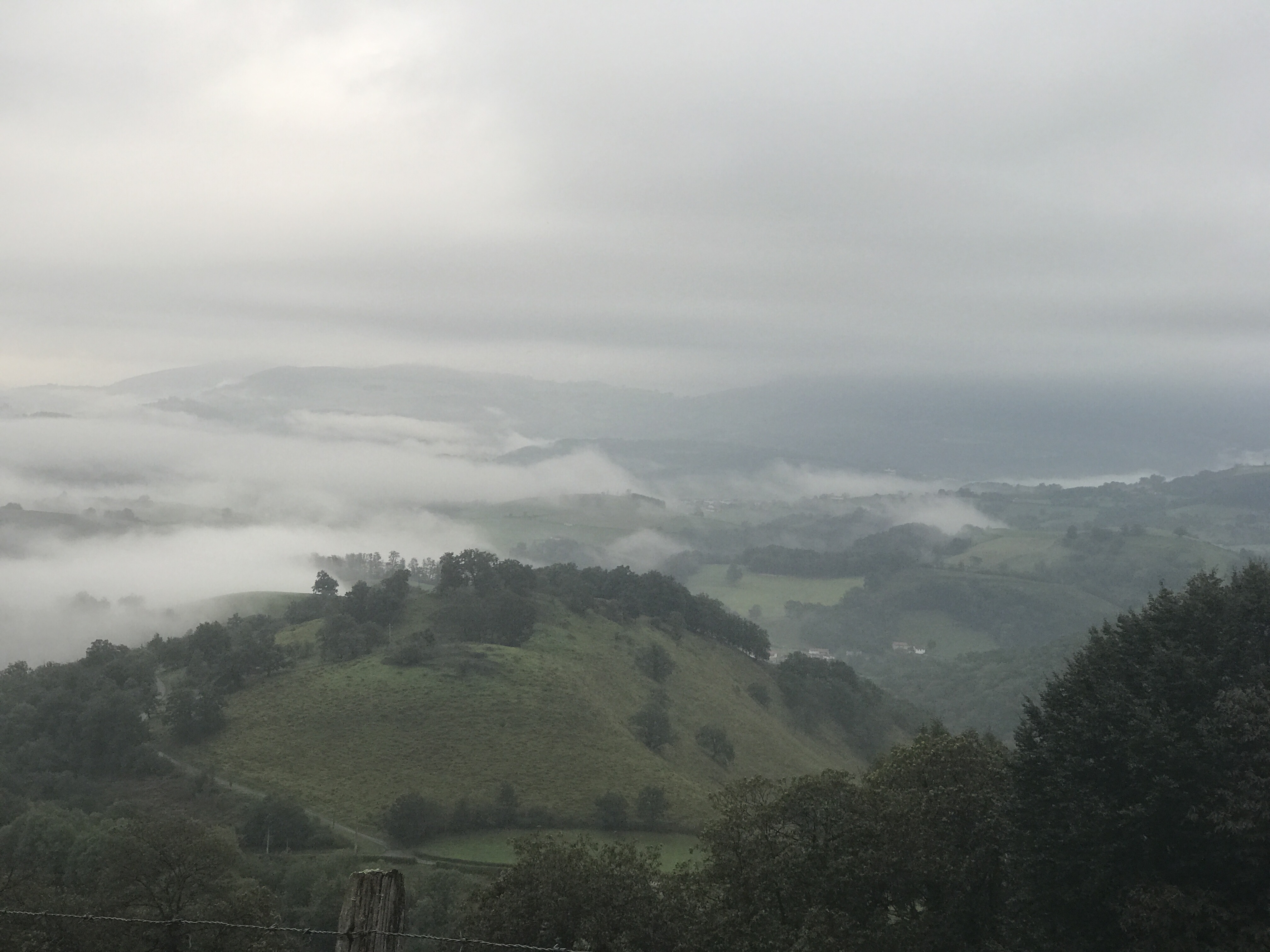 The forecast had been calling for rain – not ideal for walking up and over the Pyrenees especially when the route is mostly through farm fields and dirt paths. There are two routes we “pilgrims” can choose to our destination- Roncesvalles – the Valcarlos Route made popular with the midieval pilgrims because it’s not as steep or as strenuous, but it’s a tad longer – OR the Napoleon Route- a kick your ass 17-mile killer hike with a total elevation climb of about 3000 feet.

Being only 5’1″ – naturally I chose the Napoleon Route.

I had read that this climb will humble even the most fit. I thought that was just a bunch of talk – I mean, I hike in the Colorado Rockies – I know stuff, I can climb.

So I pulled my shit together and rolled out of bed. I got dressed, put on my headlamp and walked out onto the streets. It wasn’t raining – I thought it was a good sign. 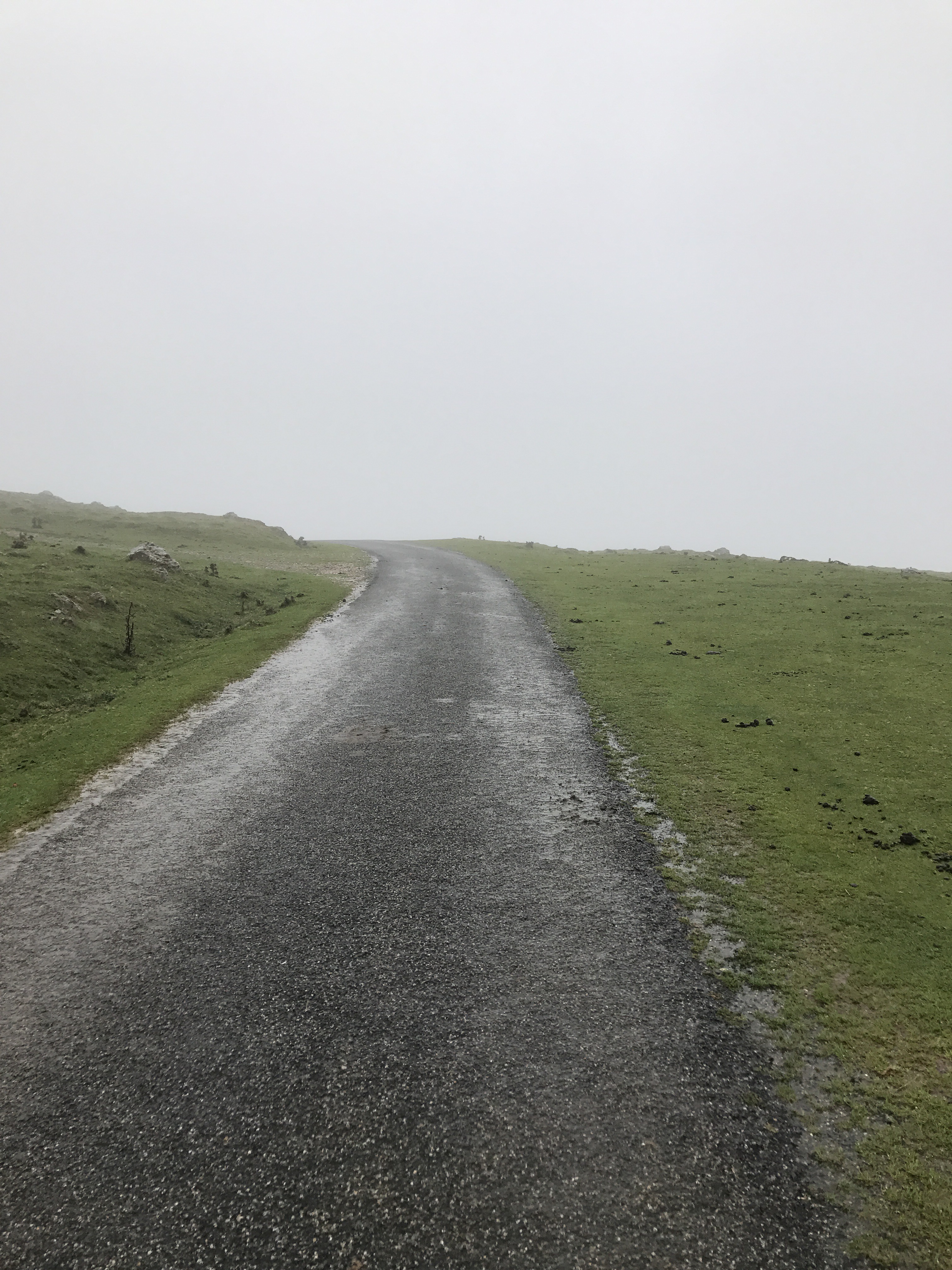 The walk (many call it “The Way”) leads out of Saint Jean on Rue D’Espagne through the ancient walls. The path is marked with red/white stripes and yellow/blue shells and yellow arrows. (Wait, isn’t yellow the color for cowards- THAT was the sign I was looking for!)

As I joined the other early risers there was a sense of anticipation and excitement – we were doing it, we were joining those who have come before us….. we were doing something that doesn’t make sense to the sane among us!

As the street winded out of town and to the left – there it was – the wall. I mean this road went straight up. You couldn’t see the end because the road just went straight up into the clouds.

Deep breath… one foot in front of the other and repeat for 17 miles.

And then the rain started, misting at first but a cold and refreshing wake-up call that this walk is serious shit.

I gave myself a pep talk, I can do this, it’s only rain I’m not made out of sugar. And so it went for 17 miles. 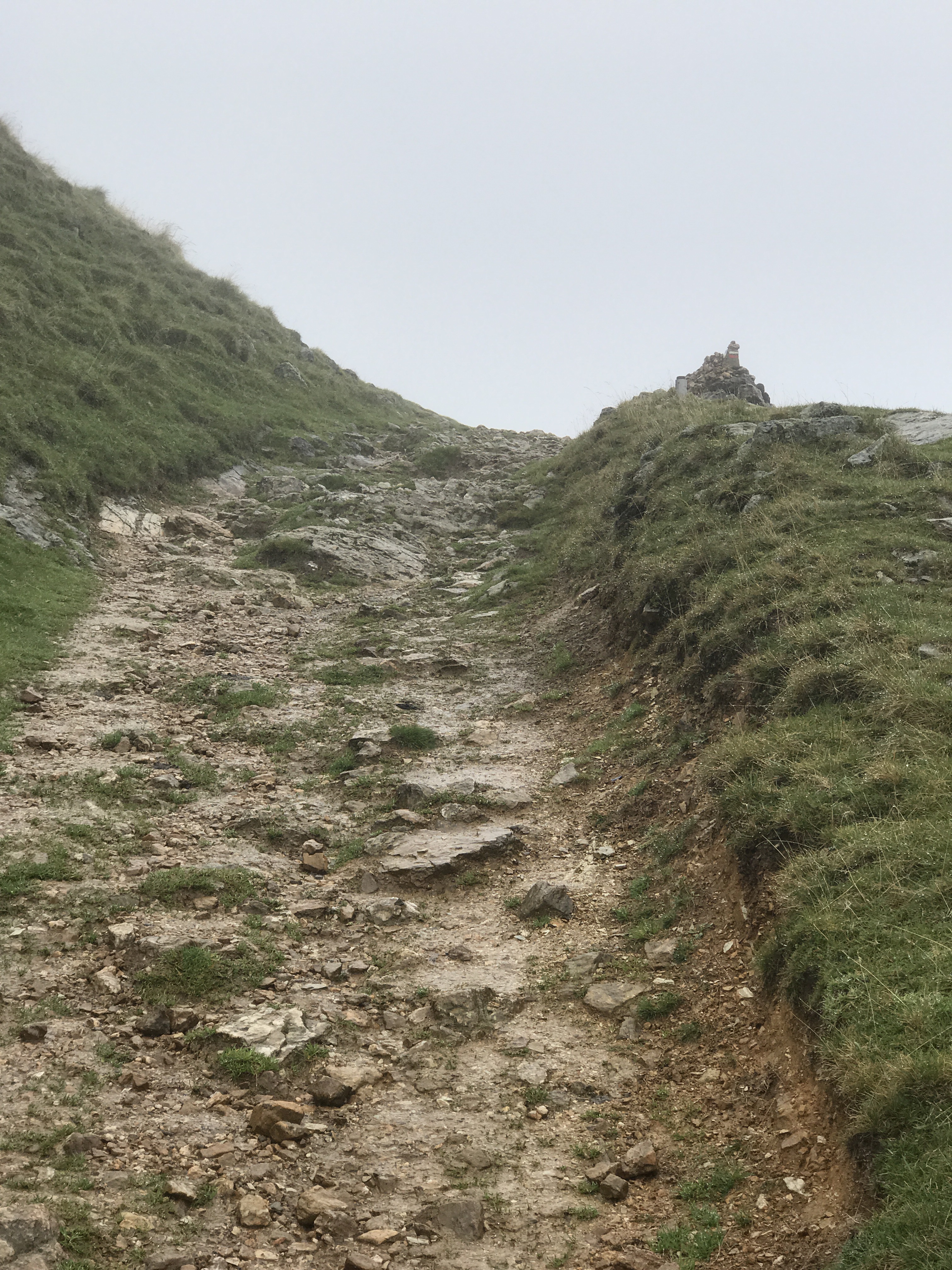 The mountains were shrouded in fog – you couldn’t see 20 feet in front of your feet which was a good thing cause I couldn’t see the mountains after mountains that I had to climb. All I could do was listen to my own breathing, my spastic staccato of my new hiking poles touching the ground out of synch with my pace, and this beautiful symphony of voices and bells – no, not the bells of St Mary, but the bells the local farmers put on their sheep, cows, and horses. The animals roamed freely mixing with us pilgrims as we struggled onward and upward – I’m sure the sheep were like, “Whose the sheep now.”

It was so great to hear voices from all over, the loudest and cheeriest were the Irish; you could hear them cursing (or praying) up the mountains with their “Jesus, Joseph, and Marys. The French talked non-stop with their “ooh la la’s,” the Americans were the heavy breathers, the Italians made the unbearable almost bearable with their voices that make every sound better, and then there were the Brazilians and the Koreans. The Australians were loud and I always smiled when I heard them- I had to fight the urge to say, “Hey mate, let’s ditch this drudgery and go party.”

I bitched and moaned to anyone who would listen, and every single person offered their encouragement – especially the young Italian brothers, tho I think they’re hoping I’ll do their laundry.

By hour five I came upon wild blackberries and began scarfing them down. The bushes were picked empty and I was quite proud of my passive aggressive assault on the path. “That’ll teach you – I’m going to eat this mountain clean of your berries, take that sukkah!” 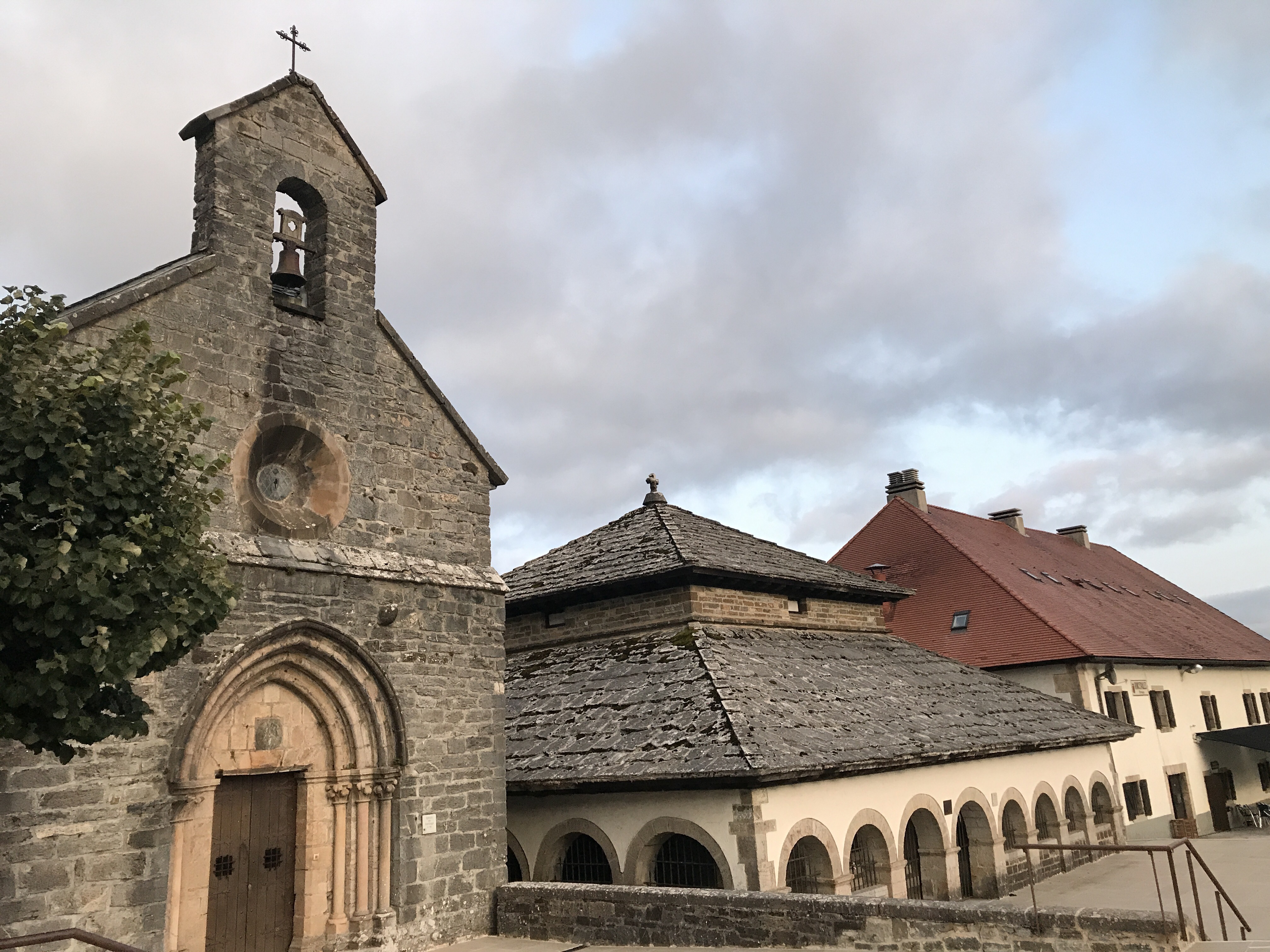 It took me 7.5 hours to follow the same path Napoleon carved out with his troops, and by the time I reached Roncesvalles, the sun was beginning to shine and I was beyond proud of these stubby legs and tired feet.

Tonight I’ll sleep like the dead, set my alarm clock to ring again at 6:38 and rise in the morning full of confidence knowing that, yeah, I’ve got this! 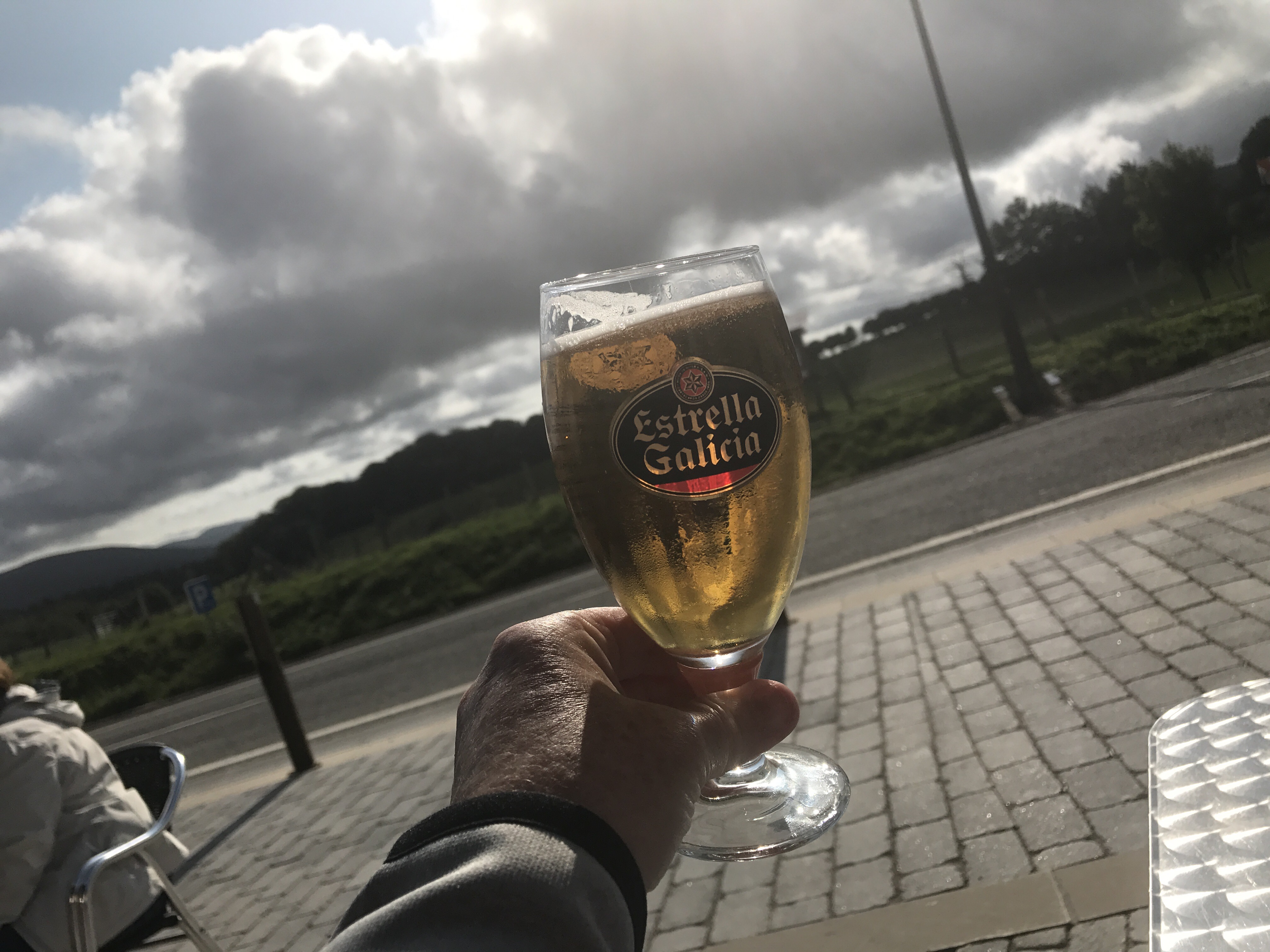