Today was all about letting go…. and holding on.

Ever since I started researching walking 500 miles on the Camino Frances from St Jean Pied de Port to Santiago de Compostela, there was one stop I really wanted to visit, and hopefully make a lasting memory. 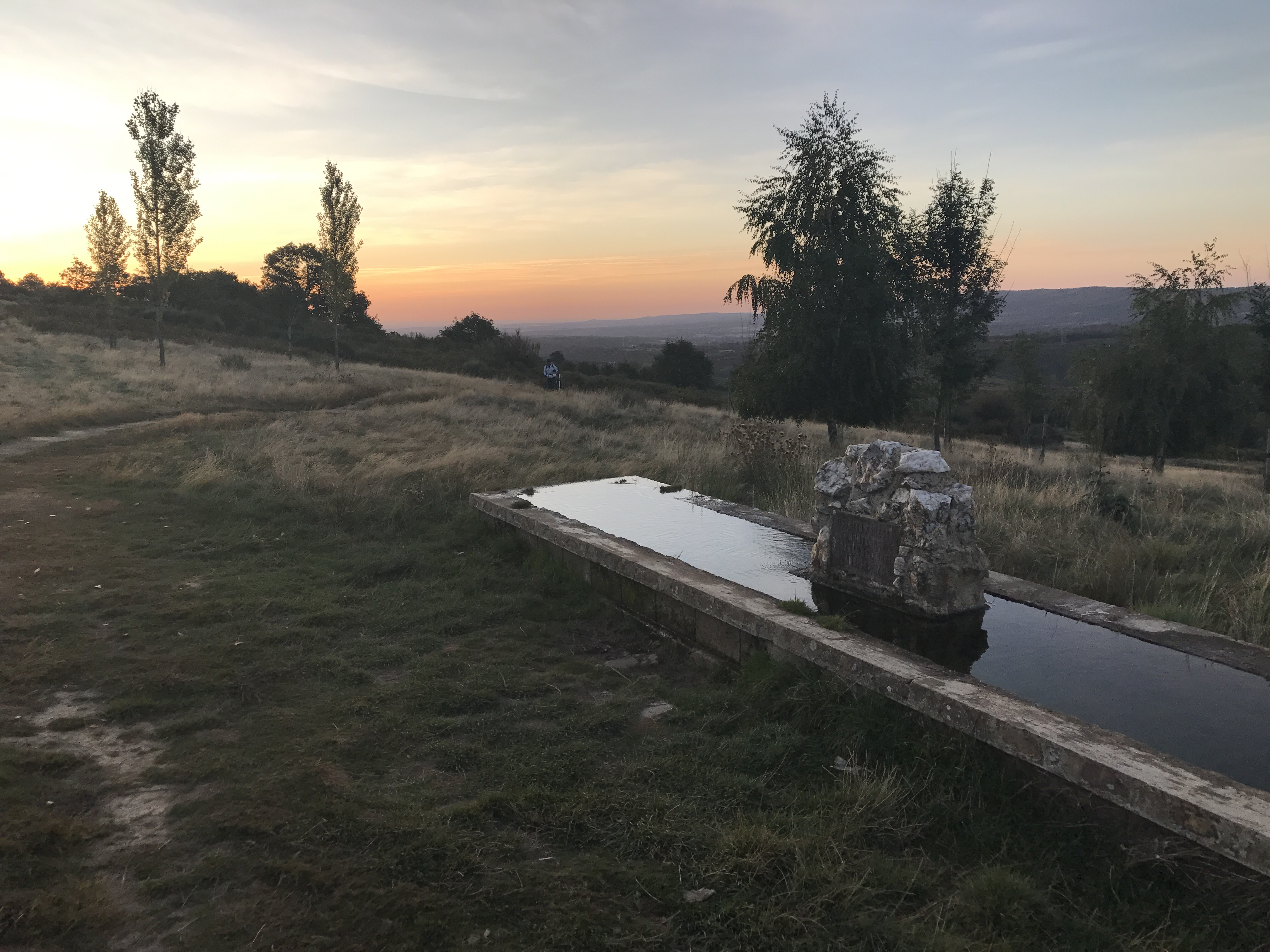 I left Rabanal just before dawn this morning knowing that today was going to be a tough climb up to the Camino’s highest point. I wanted to give myself enough time, and I wanted to avoid the blazing Spanish sun.

As the sun began to rise, I was treated to a vast variety of vegetation-evergreen trees, shrubs, and heather and oh so much more.

It was glorious. The sky was that perfect combination of pinks and blues… it truly was breathtaking. 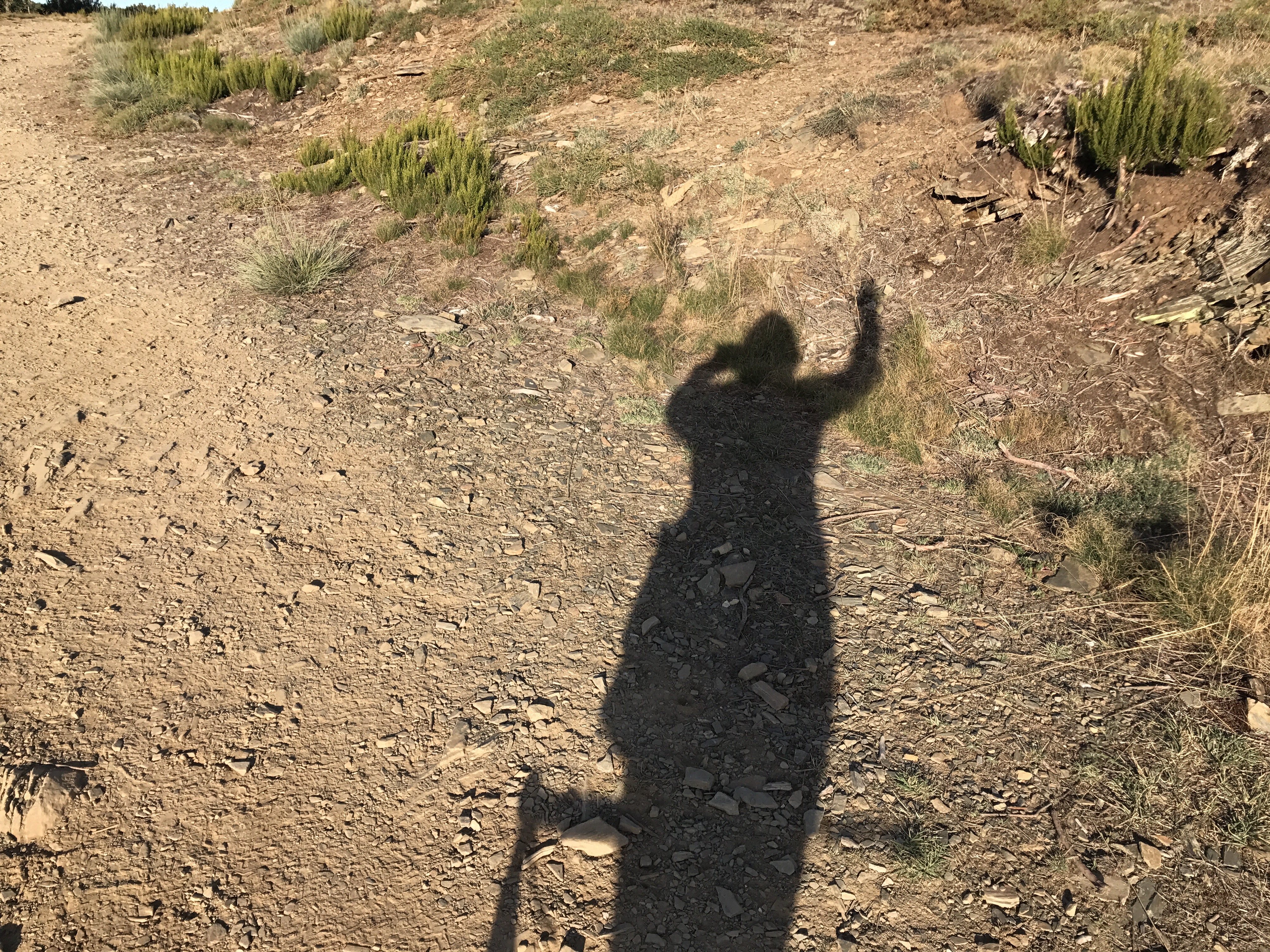 The climb winded up over several mountains and at one point I forced myself to look back and wave goodbye to all the miles I’ve traveled.

As I neared the highlight of today’s walk – Cruz Ferro – I tried to really focus on what I was going to “leave behind.”

Cruz Ferro is a tall pole topped with an iron cross. The site is said to have been an ancient monument first erected by the Celts, then the Romans seized it to honor Mercury (protector of travelers) and then the Christians took it over around the 9th century. For more than a thousand years, pilgrims have brought a stone and placed it at the site to represent their “burden.”

During my training back in Colorado, I found the rock I would carry with me to leave in Spain. As I was nearing the site I was trying to figure out what burden it would represent and for the life of me ….

Wait! Is that my cellphone ringing! Yep, it’s my husband who has joined me on my Spanish Schlep. He’s driving – I’m walking – and we are to meet up for lunches.

“Umm, I’m on top of a mountain, turn on your GPS or iPhone.”

Ok then, back to my momentous decision-what burden do I want this stone to represent on this holy trail.

And then I had it, I decided when all is said and done, I would use my stone to represent my….

“Ok, I’m really lost. The GPS says to take the highway and it’ll take me 53kilometers out of the way.”

“Umm, still on the mountain.”

Back to my burden…..

I have none I decided, instead I was going to give thanks for the wonderful life I have, my family, and my friends.

So after dropping my rock I had to make my way down from the Camino’s highest point. And guess what – I found out what happen to all the rocks from pilgrims past.

OSHA would have a field day! The trail (I use that term loosely) is full of river rocks and it was scary as ass! It was a harrowing walk made more difficult because I still can’t wear my hiking boots cuz my feet still have giant blisters, so I’m walking down the mountains wearing sandals and socks. 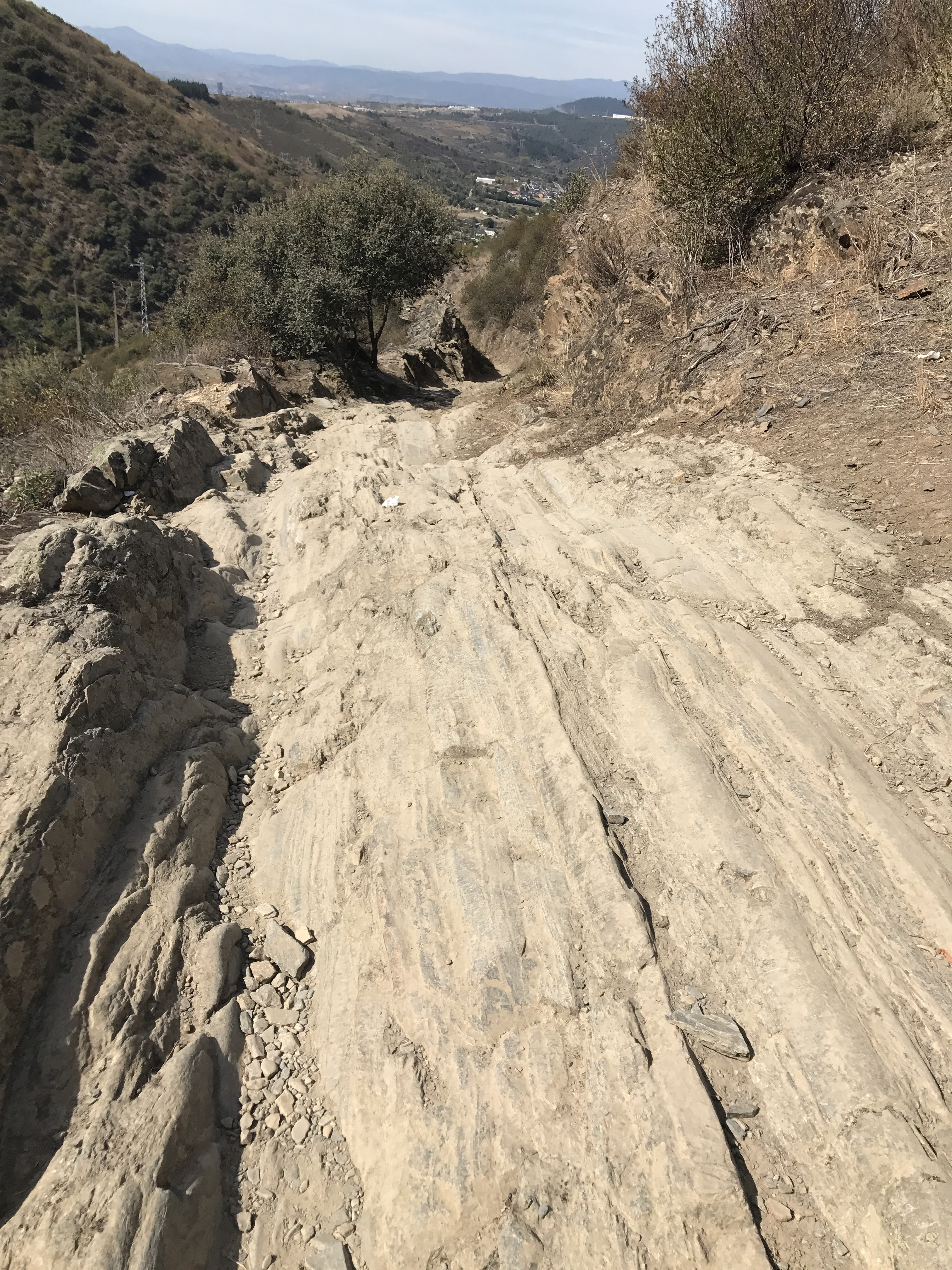 Soon the river rocks were replaced with slick and fragile slate. As you stepped down on it, pieces would break away.

It was terrifying and brutal on me and my fellow pilgrims. Bum knees were causing people to sit by the side and literally cry. New blisters forced strangers to help each other with make shift ERs.

And then there were the …. Fuckkkkkk there’s the phone again.

“Hey, sorry to bother you, but you think you’ll be able to meet for lunch?”

“Kind of busy here trying not to die on the mountain.” 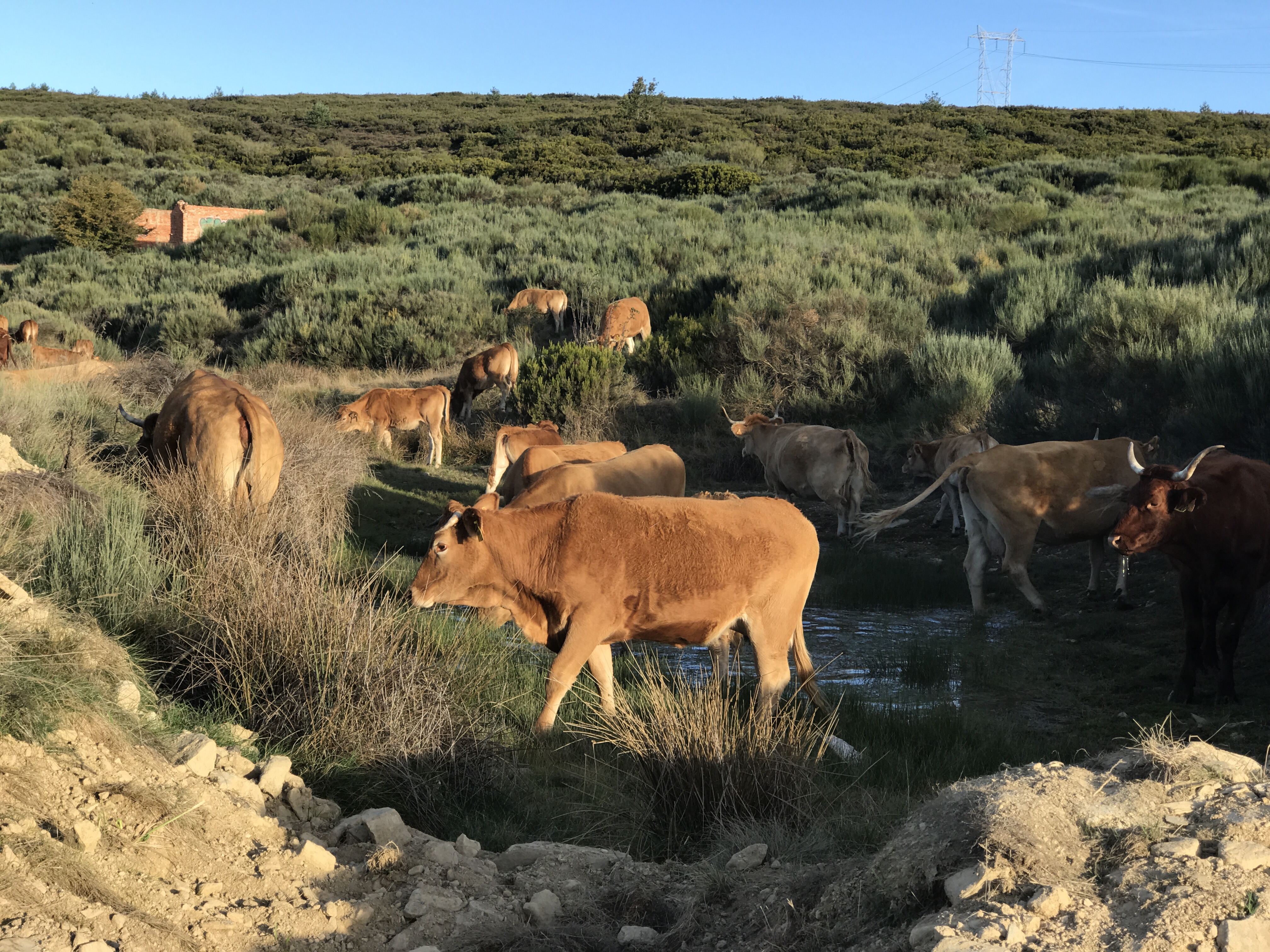 And then there were the cows…a herd was being moved from one field to the other and they were making our journey even more perilous with their giant patties. (Here’s where I want you to remember — I’m wearing sandals!!!!)

I made it down, and realized I had managed to let go of any perceived burdens, but my husband and I are still holding on to what works for us.

I navigate, I plan, and he (mostly) takes directions. It works for us…. on and off the Camino, with or without GPS, or even Find Friends.

When we get back from our Camino- I’m going to work with him on this whole directions thingy. 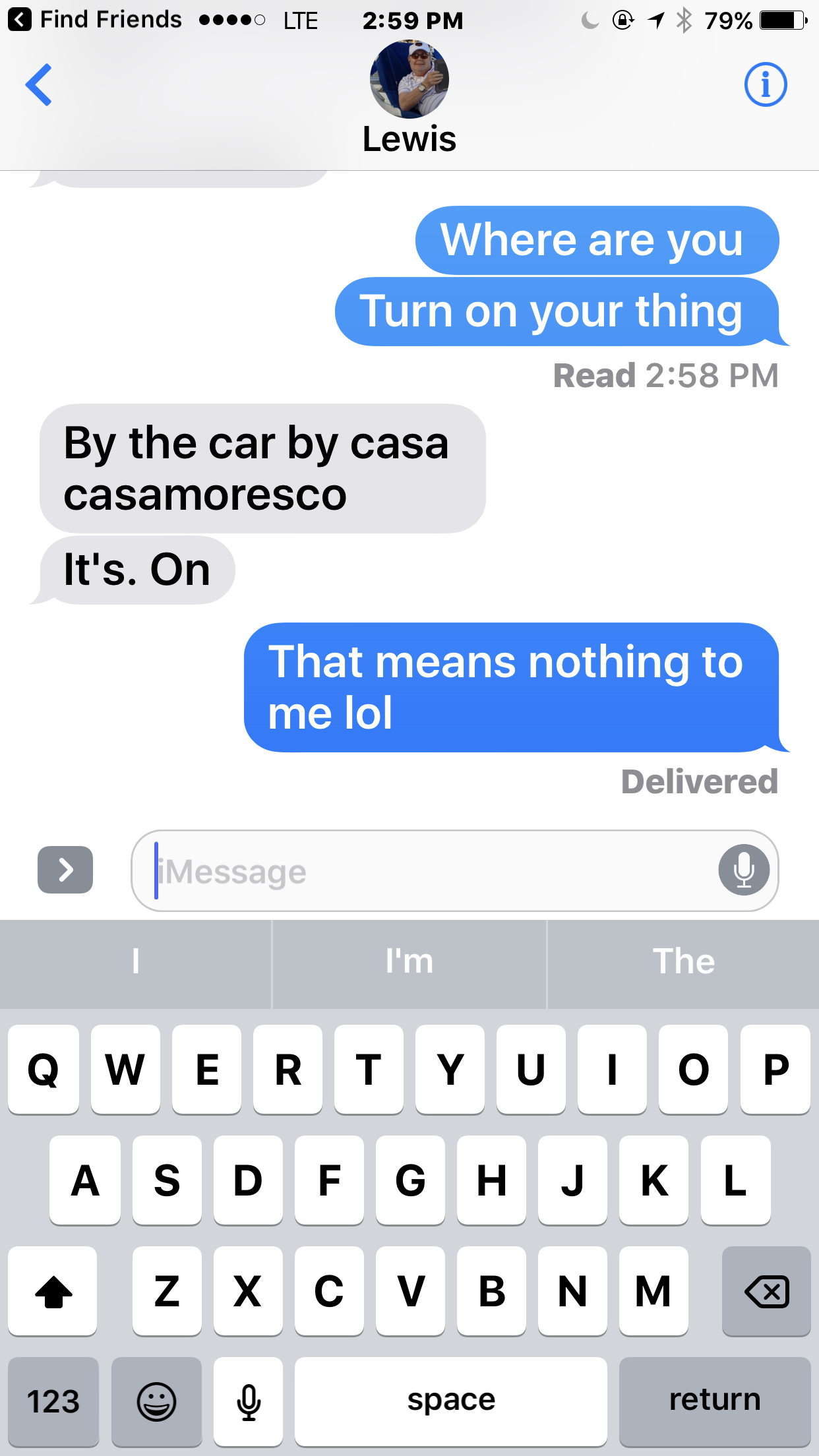 22 Miles marched today – YES, I am that insane