Faithful readers will know that before I took off for my Spanish Schlep, I did some Camino grooming – getting my hair done, a pedicure, and a waxing – like the Full Monty or as I call it, the Telly Savalas. Yeah, a tad pervy but – pristine for my plans to walk some 500 miles across Spain.

So here I am on Day 9 and wouldn’t you know it – the Camino had me by the short hairs! The nibs are starting to rub. Any woman who has ever waxed or shaved knows how irritating that is (for you guys, it’s like that 3 day-old beard it itches like hell).

So there I am on the holiest of holy trails dying to scratch – but the path was full of pious pilgrims and I didn’t need their judgement. So I did the “cross legged walk” it’s kind of like a drunk swaying side to side – didn’t fix the itch – nor did the dropping the hiking poles and sneaking in a quick scratch.

It was getting unbearable so after about a mile I just said fuck it – judge away I gotta scratch this itch.

As I stood there scratching away in front of God, the vineyards, and the entire world I giggled at what my mother would have thought.

My mother spent every penny she earned trying to forget her scarring childhood. She grew up in England during World War II and her father was captured at Dunkirk and held a prisoner of war for the duration of the war. Her mother did what thousands of others did during that time – she sent the children away “to the countryside” where they thought the kids would be safe from the bombs and air raids.

They were and they weren’t.

My mother built a fantasy, glamorous world for herself once she was safe in America and raising two kids of her own.

Whether it was cereal or sirloin, we ate off the Wedgwood. She never owned a single paper plate and she washed her Irish linens by hand – and ironed them to perfection. Hell she even ironed my dad’s boxer shorts – she wanted, she needed the good life.

I met my Spanish mother last night when I bedded down at her B&B in Ventosa, another medieval village that populates el Camino from St Jean Pied de Port, France to Santiago, Spain.

Her house like ours, was decorated with antiques. Her curios cabinets were not full of silver or china like ours, instead hers had Pre-Colombian pottery, and when we tired pilgrims sat down at her dining table for a home cooked meal of salad and paella- her fine china was laid out set upon her Irish linen table cloths and yes, her napkins were ironed, and like my moms, with starch. 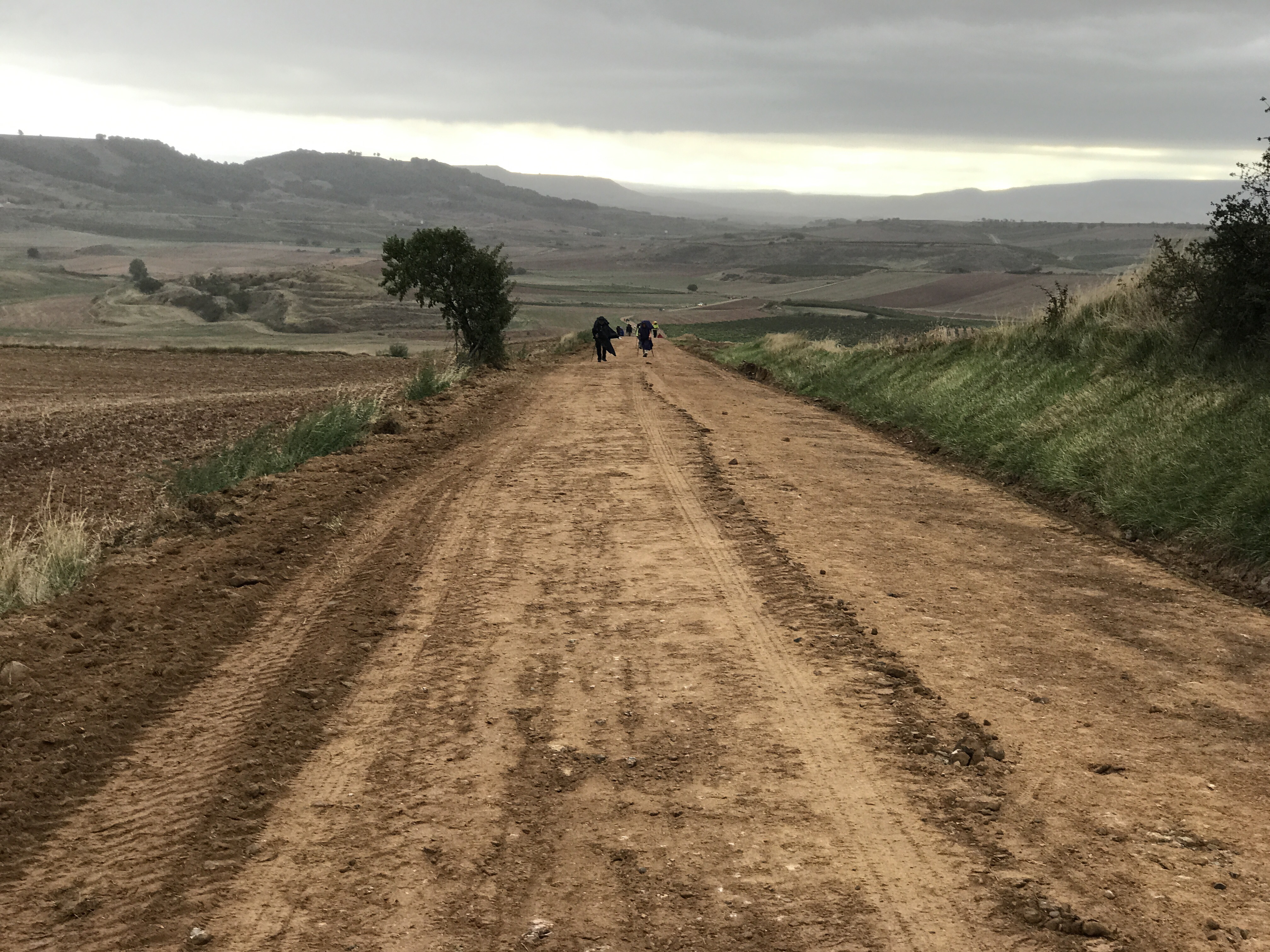 My Spanish madre was so like my English mum that she even took my iPhone off the table – with such grace and politeness- that I knew I had been reprimanded yet, I didn’t mind it one bit.

So when I got up this morning after sleeping in a freshly made bed with sheets that had been dried on the line – I was totally refreshed and decided to spoil myself with a taxi to cut off a few miles from today’s hike.

I felt a tad guilty but didn’t know know enough Spanish to tell the driver, “find somewhere out of the way so these judging pilgrims won’t see me.” My Spanish is limited to being able to order off the Taco Bell menu.

On the trail, I was like a new pilgrim refreshed; energized, and happy to be slogging up yet another series of fucking mountains in the bitter cold rain.

Today’s rain was like Forest Gump rain – it was coming down in all directions, pelting me on either sides, and yes, it was even coming up from underneath. Unlike yesterday when it was in the blistering high 80s, today it was in the low 50s.

What the friggin fuck is that?! 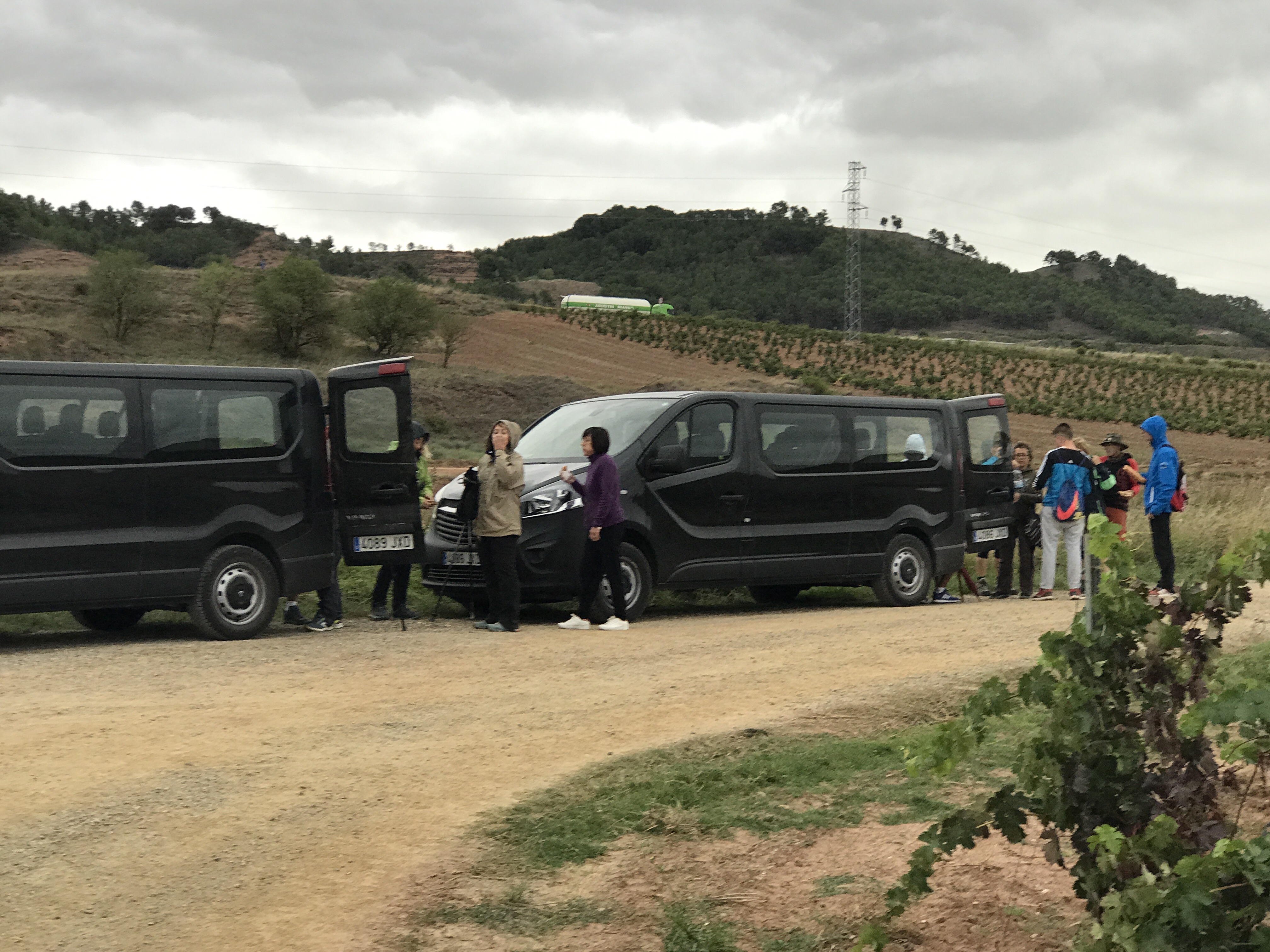 As I’m trudging up the muddy inclines, following some English guy who’s wearing shorts for God’s sake and who’s pasty fleshy thighs are quickly turning red in the cold and rain, there’s two enormous tourist vans pulled over serving their Italian clients sandwiches and espresso! ESPRESSO on the fucking Camino out of the back of a van!! Those fucking Italians know how to make everything better.

So if they can get catered lunches and fucking espressos on the fucking Camino – I can take a cab for nine miles and scratch myself like no ones looking – and if anyone has a problem with that, well as my oh so proper mother would say – “Tell them to go scratch themselves!”

Tomorrow: On to Belorado!